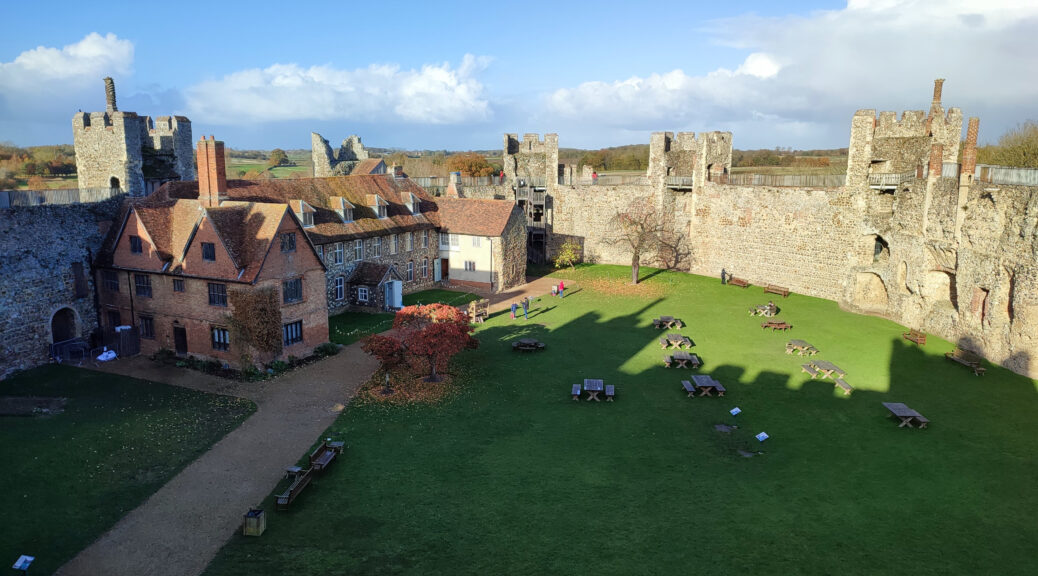 We recently spent a couple of days in Suffolk, somewhere that Liz hadn’t explored very much. I’ve been to a few sights when I lived in Cambridgeshire A Long Time Ago. So, it was ripe for exploring.

First up was a town we recently heard of in a couple of places; Lavenham. It was featured on BBC Four’s ‘Pubs, Ponds and Power: The Story of the Village’ as well as a handy book we have called ‘Escape London‘.

It’s considered the best preserved medieval town in England. It boomed in the 15th and 14th centuries due to the wool trade, but didn’t properly survive cheaper competitiion that arrived in later centuries – hence it not being changed too drastically.

We got there a bit later than expected so only had time to explore the Guildhall. These buildings have been used by the Guild of Corpus Christie, then in the 17th century they were a bridewell aka a prison, a century later a workhouse. In the second world war it was used as a social club for American soldiers. After the war, it was doated to the National Trust who have since looked after the buildings and turned them into a museum.

Next day was a drive to Framlingham Castle. There is so much to say about this place, it best I just link to the wiki article where someone has already done the hard work. I think it was my favourite place we visited. The guided tour that we had was great, an enthusiastic guide who can explain things simply is always a win.

There aren’t a lot of interiour buildings left, but what you can see is a mixture of 17th century school (red brick building), 18th century work house (the main, larger bulding) and late 11th century walls with some added Tudor chimneys. I’m a sucker for Tudor chimneys.

Last but not least was a stop to nearby Sutton Hoo to have a look at the Anglo Saxon burial mounds that were excavated just before and then after WWII. Netflix recently released a film about the excavation called The Dig, which while isn’t amazing, is still worth a watch.

I had been here before nearly 15 years ago. It was one of the very first adventures Patrick and I went on after we moved to the UK, so my memory was a little sketchy.

One of very recent additions to the site is a veiwing platform over the builral mounds. From the top you can clearly see Mound 1 aka the king’s royal burial in which the skeleton of a ship was found, as well as the famous Sutton Hoo helmet and sheild.