This week I happened upon a photo of Anerley Station, our local station, taken in the 19th or possibly early 20th century and one from a stone’s throw away in Maple Road. Both are places that we’ve walked past so many times but had never seen these photos of before.

What’s a couple of nerds to do? Go and recreate the photos of course and check out what has changed and what has stayed the same.

First up is the photo of Anerley Station Road 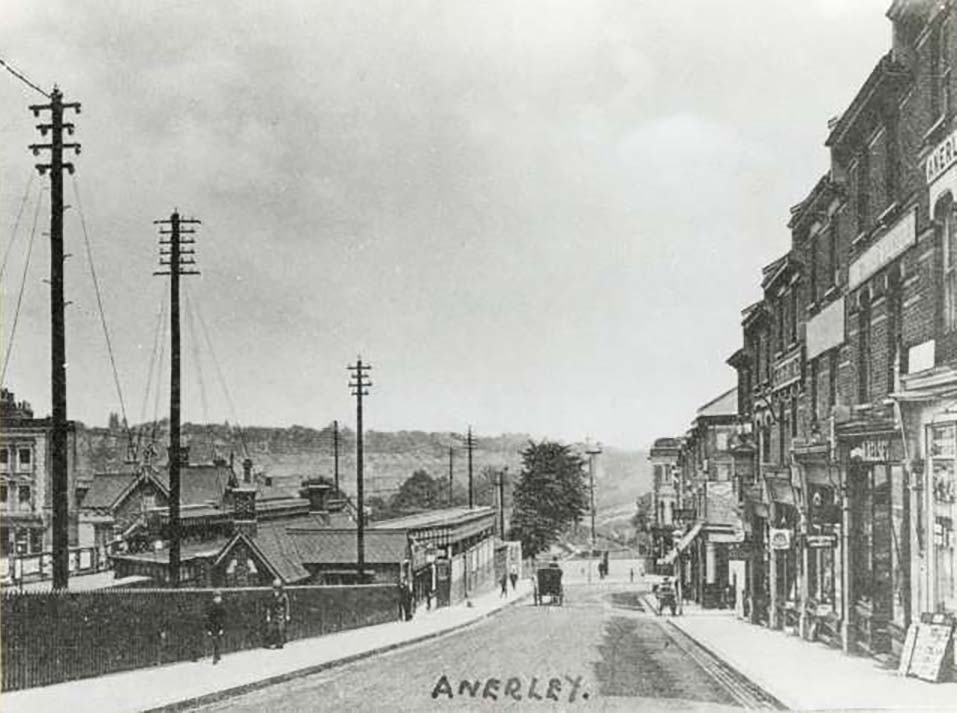 The most notable change is the trees! The statoin building is barely visible nowadays. The building at the end of the road is still there, though again hiding behind the trees. The row of shop fronts along the right of the road are the same. You can see the sign above the first set of windows in both photos. It reads “ANERLEY BUILDINGS”.

When the station first opened in 1839, it was called Anerley Bridge. It didn’t serve many people – it was mostly a rural area. The station was built as part of a deal with the land owner, Scottish silk manufacturer William Sanderson. A personal station as a perk for running a railway through what was at the time private land. The name of station and the area are thanks to William. He named the house he built here Anerley Lodge. It’s said that in Scottish dialect, Anerley means ‘solitary’.

Next up, Maple Road

It’s 1914 and we’re standing not too far from the street that leads to our cul-de-sac. We take this route a lot when popping up to Penge High Street, or Winsford Gardens.

On the right side, not much is left from the first photo. The area were the 2-level block of flats are was home to a button factory from the 1930s to 1960s.

The two corner buildings on the left side are both still there, though the former Golden Lion pub has since been converted into flats. Something that caught our eye is that the street sign from the first photo is still there in all of its blue enamel glory:

The pointed roof you can see in the first photo is the spire of the former Penge Baptist Church. That particular iteration of the church was knocked down at some point, but I can’t find out any info. A smaller church was rebuilt using half of the original site. There is a tiny bit of the old church still standing, now playing host to some street art:

I’ve just ordered a book of old photos of Penge and Anerley off the back of this little project. Expect similar posts in the not too distant future 🤓